But for You, Yes 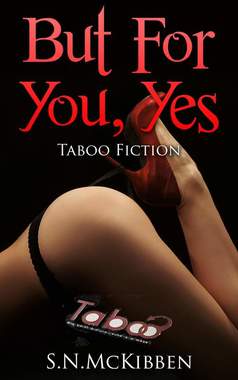 Andre wants to tell his girlfriend how he REALLY likes it. But Melonie isn't so convinced she'd like sex that way in But For You, Yes.

​“Can I ask you a question?” I posed in the bed with my muscled arm flexed holding up my head. Thoughts swam around in my mind about how I should ask my girlfriend of six months my deal breaker question.

She rolled over slowly, staring at me with that oh-so-familiar serious look. Melonie was the intuitive type. She always knew when I wasn’t joking and when my jokes had truth to them. It made her an invaluable companion, along with her olive skin, ebony hair, and eyes with the power of a black hole. That combination of hers never failed to get me to “rise” to any occasion she wanted. Plenty of those occasions were kinky enough to make me have hope that this relationship could go much further than ones in the past and fulfill my sexual perverseness.

“What do think about back-door love?” I thought I was being as suave as possible about the subject but wasn’t reassured by her giggles and shaking head.

She climbed over me, pinned a kiss on my forehead and sauntered out of the bedroom. I lay there wondering what she had implied.

Damn woman, that wasn’t an answer. Again, her intuitive nature deflected my question. A metallic squeak followed by hissing water from the bathtub rang like a mating call. Excited that this may be a “yes” to my real question, I flung the covers over and strode to the shower.
She was already in, bent over adjusting the temperature, when I pushed the curtain aside and hopped in behind her. That friendly pull from my groin started the blood flowing, and I stroked myself in anticipation.

Melonie straightened and turned to face me, “No.”

Her tone of finality shocked me. She was always the one to coherece me into nerve-wracking situations when it came to hot monkey sex. And she was telling me “no” for the first time. I caressed her smooth arms, “No to shower sex, or no to the other question?”
“No to both if it includes fucking me up the ass.”

I pulled back at the strength of her conviction. She didn’t give me her usual “show” flaunting her curves and assets that made me jealous of soap. Instead she hastily dowsed herself and showered in the time it takes a typical man. I meandered in the tub watching her and rinsing myself when she left.

Was she slipping away from me because of a question? Had someone told her I break it off with girls when I can’t convince them to let me have it up the back alley? I mean, I’ve never told anyone that, and I hadn’t made it obvious, but this was Melonie we were talking about. She knew me. There wasn’t another woman like her, and an average Joe like me wasn’t going to have another Melonie.

Her overnight bag was already packed and she was shoving her size six pants on when I got out of the shower.

“It’s Saturday, where are you going?” After I blurted my words, I noticed she was crying.

Like a slap to the face, realization said her kiss to my forehead earlier was “goodbye.” Blood drained away from my face. This was too fast. I was supposed to be the worthless bastard that left her, not her having to be the stronger one and take off. It was always more difficult to be the one to sit down with the significant other and say “this isn’t going to work out.” Blame was always on the one who stated the truth first. That’s why I always had been the one to break relationships off.

“I thought you were a wonderful man, Andre. I can’t believe you’d want to hurt me like that.” She pulled a white tee-shirt over her head and began to put on sneakers.

My heart sunk,. “What are you talking about? I don’t want to hurt you! I wouldn’t.”

“Have you ever been fucked in the ass before?”

My silence gave her the wrong impression, and now I had to back pedal. Her eyes sucked me in like they always did and within their depths was betrayal.

My jaw slackened and anger flared. “Some amateur shoved themselves into you, didn’t they?” That was the real issue here. Someone had hurt her badly, probably thinking they didn’t need lube or that you didn’t need to treat newbie’s with care and precision.
She dropped her eyes giving me enough of an answer.

“You’re wrong.” I clenched my fists. “I do know what it feels like.”

Tear-filled eyes looked up at me with reservation.

Her astonishment made me smile and brought hope to my soul. “I wouldn’t use this on you. It’s not sanitary. And for the record, I wouldn’t hurt you, even if you asked me to.” I took advantage of her dumbfounded stance and sat her down on the bed. “Just because someone who didn’t know what they were doing hurt you doesn’t mean it will always be like that. Did you stop having sex after your first time?”

The sucking power of her miniature black holes had me in infinite rotation around her orbit. “Did it hurt your first time?” I leaned closer into her face.

She grimaced and nodded.

“Well then, there’s your answer.”

“Did it hurt you? The first time—“, she glanced at the silver bullet as I lowered it back in the chest.

My dick reacted to the memory and poked at my wet towel. “No.”

She looked at me skeptically.

“I was with a professional.”

She giggled, and then horror struck me at my implication.

“The point is I know what to do and how to make it feel good.”

“You don’t believe me. You think I’m joking?” Here I was baring my darkest secret, and she couldn’t muster up a “you’re lying” comment.

“No. It’s just that—you seemed like a regular guy.”

“Whoa now, I’m not gay or bi-sexual. It was only once. Don’t judge me for a one-time curiosity.”

She nudged my shoulder, giving me the courage to push further.

“So, how ‘bout trying it with someone who cares for you and knows what they are doing?”

Her light-hearted mood turned sour, and she leaned away. She still didn’t believe a word I said.

She looked so serious, like it was a matter of life or death, but I just laid back and relaxed all the tension in my muscles. Slowly the tip came back, and I moaned at the probing object. While the cool plastic entered my anus, realization slapped me across the other side of my face. All of this, her issue with sodomy, my truthful admittance, what she was doing to me right now was all about trust. With that realization, my heart burst and a wave of warmth flooded the inside of my body. The decision was made that I would give her and this relationship everything I had.

Goodreads reviews for But For You, Yes