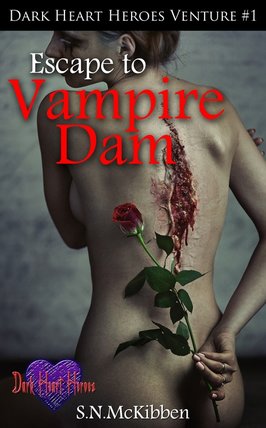 ​Zompocalypse is here... but the saviors of humanity are the very monsters that drink human blood.

Noir Tekeste is one of a hand full of survivors that hasn't been zombiefied living at Vampire Dam - a vampire protected human refugee camp. Life is simple. Avoid zombies, make babies and donate blood.

When Noir finds a note from her lost son she's determined to leave the safety of Vampire Dam to find him. Armed with her wits, a flashlight and a vampire escort named Jason, Noir finds more than zombies await her on her quest.
AMAZON

A long, black flashlight peeked through dirt and fall leaves. It was a relief to have my one last reminder of a civilization where batteries could be bought in any town mart. I tucked the flashlight in with my belongings and handed everything over to Ass-wad.

Jason tossed our packs on a raft that came straight from Huckleberry Finn.

I pointed to logs tied together with rotting rope. "We're riding on that?"

Jason bent down--ever the model of how to properly pick up a box with his back straight and knees doing the work--and picked up a twelve-foot pole. He tested the raft with one toe before putting all his weight on it, and held a hand to me.

Throwing up my hands, I jumped onto the logs and almost fell on my ass, but an arm snaked around my middle and crushed me into a stone-hard chest. My hands caught the hem of his t-shirt, slipped under the cotton fabric, and got a good feel of his nine-pack abs.
My clumsy haste provoked Ass-wad’s famous scowl.

"Wet logs don't have much traction." Jason's chest heaved with the words and then stopped. I wish he would continue breathing. Or on second thought, maybe it was best he didn’t. That one heave of male chest awakened lower nerves. The kind of nerves that made my cheeks warm.
I went to give Ass-wad a disparaging answer but he was holding me so tight only a squeak came out.

Shit, he was staring at my neck. Right where my pulse was pounding just under the skin. This perfect soldier and strict self-disciplined vampire was wound drum-tight.

He released me. Air rushed into my lungs, blood pounded inside my head. My knees gave out. I braced my hands to keep from crashing on my head. Smooth wood meet my palms.

Our rapids “death-trap” started drifting downstream and then the craft rocked forward. Jason’s poling created a steady rhythm of lurching forward, gliding to a halt, and lurching forward rocked me into a serene state of mind.

The firs were green. Birds who dared stay up this late chirped. The call of cranes echoed over the river. I watched everything and anything to ignore Jason's display of upper body strength. His hips’ slow twist in unison with those arms flexing under the pressure of hard labor. How could a girl not want?

A choice between lethargic human guys, or a power house vampire that can last for hours? Not much of a competition. I don't blame Maggie for jumping on Frazier one bit

Cloud-blue eyes captured my attention. I didn't know how long I stared back. It felt like hours.

I heard vampires could read your mind but the rumor was only speculation among us humans. A case of for them to know and us to find out. Heat rose to my cheeks as I thought about him hearing my thoughts. Geez. Poor guy. The temptation if he could.

He smirked. I wanted to look away but I didn’t want to give him the satisfaction of winning the stare-down. Lucky me, he looked away and my dignity was saved.

When his attention landed on the river his smile retreated.

"Look at me," Jason said, keeping his eyes on the water.

My eyebrows scrunched together. Look at him? You looked away first. You lost buddy. No second rounds. "Now you’re being presumptuous."
He didn't answer. That faint smile a moment ago was the only reprieve I would get from Ass-wad. Jason remained on his task. Hip roll, arm flex, hip roll, arm flex. I really couldn't watch anymore. Not unless Jason didn’t care about rule number two. It would never happen. Ass-wad didn’t think about sex.

"Noir." Jason spoke to me like someone approaching a skittish poodle. "Look at me. Don't look away."

It wasn't a conceited request. There was something wrong.

I turned around and froze.

In the moonlight I wasn't sure what I was seeing at first. I thought it was mismatched boards slapped together to make a gate. Then I squinted in the moon light.

"Oh my god." Every muscle taut and ready to flee. Still I couldn't move.

"Look at me." Jason growled, continuing his meticulous pumping.

My mind went on overload. Panic threatened chaos. At the side of the river, in single file from one end until I couldn’t see, stood zombies.
Some glared at Jason with all the hate zombies and vampires shared for each other. Some gave me the thousand-year hungry stare. None of them moved. Their bugged out eyes followed, but not their heads. The muscles in my arms shook.

Battle-worn zombies. Each one gnarled, rumpled with skin or a body parts sloughing off. Zombies that came out from a scrape knew how to survive, knew where people lived, knew how to hunt.

"They won't get you." Jason wasn't great with words, but his conviction was the safety blanket I needed.

Tremors rattled my body so deep I could hear my own bones rub together. I wrapped myself in a cocoon of ignorance and buried my head between my knees.

The motion helped me calm down. But if zombies didn't have an aversion to water, we'd be zombie toast. I needed something more to distract me from the horror's twenty feet away.

"Why is rule number two necessary?" My knees muffled the words, but he was a vampire. Super hearing and all that.
I heard a sigh and expected the same tired excuse. Instead I got nothing. When I raised my head, cloud-blue eyes assessed me.

Jason snorted. Wow, emotion from the Great Wall of China.

Jason continued his pole driving, while latching that stare onto me. "You ever ask yourself why Frazier didn't run?"

I shrugged. "Maybe he did."

Jason shook his head. "Your boy figured it out at six years of age."

I choked at the thought of Yiran. "Are you calling me dumber than a first grader?"

His lip twitched. "No. I'm surprised he didn't tell you."