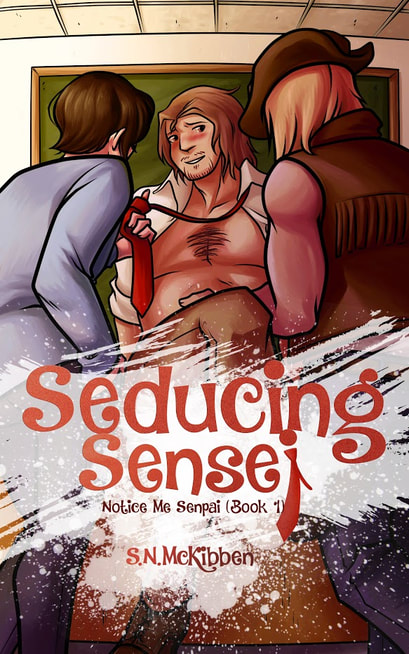 A professional teacher by day, Moriel learns that students can sometimes be the best teachers. Eighteen-year-old Scott Cooper and Itsuma Karter, two of his students share similar interests—including lust for each other. Emotions flare when Itsuma challenges “Mr. Reis’s” authority.

After Moriel harshly disciplines Itsuma in front of the entire class, the young student vows to regain a piece of his wounded pride back. Torn by loyalty for his smoldering friend and classmate, Scott Cooper watches his homeroom teacher with dreamy, lust-filled eyes.

The heated conflict begins a fiery battle between Itsuma and his teacher. As this passion translation becomes a lustful tale, a surprising ‘hot for teacher’ story becomes a love affair, and a passionate adventure.

My little troublemaker owned the space when he walked in. One might have mistaken him for a Japanese prince of some small, unknown province. Only royalty of a tiny country would have that much self-admiration. Don’t hurt yourself squeezing your ego inside the room.
Standing with feet firmly placed as if he were on the first-place winner’s podium stand, Itsuma exuded energy and confidence. I glanced at him with what I hoped was my best disparaging look.

Behind him, Scott Cooper twirled a wrangler’s rope with expert precision. The loop circled Scott in meticulous up-and-down motions. He danced a cowboy’s jig with the rope as if he’d been born to raise cattle. With those boots, jeans, button shirt and cowboy hat he should be on the back of a horse, not in a classroom. Bringing in the rope was odd, but hell if I knew what high school kids liked these days.

Scott looked at me with those beautiful green eyes, effortlessly continuing his rope hopscotch. Those eyes weren’t those of a child, but of a man who’d seen a lifetime of evil and decided he was here to save everyone. It was heart shattering to look into his soul, and yet, Scott instilled hope in my heart. Like a survivor, he threw off an air that people could overcome the worst of times. As if he were living proof.

In contrast, Itsuma’s inflated ego and Cheshire smile set off all my warning bells. I wasn’t afraid. Inwardly, I was reprimanding the chubby that sprang as soon as the duo stepped across the threshold of my classroom. I’d waited way too long to find a partner. Maybe after this I’d go to the bar to relax. Find someone to help keep my head on around this jailbait of mine. That was it… I just needed to let out this frustration.

I stood, pulled out my drawer of no-no’s and set out Itsuma’s iPod on my desk. Then I placed the two pieces of his headphones next to the small chunk of metal.

“If I take this again,” I said, “you’re not getting it back.” I pulled out the new package of earbuds and set them next to his equipment.

Itsuma picked up the unopened accessory, then laughed like I’d told the best joke he’d ever heard. “Sensei, you sly fox.”

The sound of his mirth tickled my heart. Craptastic.

Itsuma wiped the amused tear under his eye and said, “I was wondering why a math teacher would have wire cutters in his pocket. You planned this from the start.”

“What? No!” Had I? “I bought the new headphones at break.” I thought the gesture would soothe any harsh words he might throw my way. “The wire cutters were just coincidence.”

Scott stopped his deliberation, folded up the lasso and sat on one of the student desk tops. Pull up a chair and some popcorn. This should be a fun show, cowboy.

“Thank you for replacing my property, but I want something for my pride.” Itsuma twirled the package and tossed it on my desk.

My mouth ran off before I could think. “Great. The high and mighty emperor gets ass-hurt for being called out for his lousy attitude.”

The cowboy stiffened and stood up. “Zuma, come on, man.”

Something about Scott’s plea heated my blood. He might have been speaking to his friend, but it was almost as if he were telling me to run.

​Japanese and their honor. No out for me. That was fine. Let’s go.