The Demon Inside Me 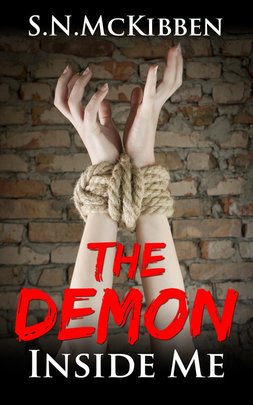 Neush hadn't known she'd be demon bait when she slipped on her jeans this morning. Now, her own family is dragging her, kicking and screaming, to the marble wall and securely fastening her in true medieval sacrifice style.

Instead of an animal, Neush knows the man who is demon possessed. She appeals to her friends’ human side for help.

Zhiek now has a choice and a passion for blood to slake. But his idea of saving Neush is very...unconventional.

*Author warning* -- this is not for everyone -- it involves not so fresh blood.
AMAZON

How do you go from the only available virgin for fifty miles around, to demon bait – in one day? Seriously, this is the 21st century. Yes, I’m in a small village with a history, but you’d think guns leveled the playing field. We don’t have to appease demons. What has been done for generations doesn’t have to be anymore. We can fight back. But no. My own nephew and uncle dragged me by my wrists to the stone altar. How did today get to be my last?

“Scream as loud as you wish, Neush.” Uncle cast a grim smile my way. His right eye was already getting puffy and swollen from the punch I delivered before he clamped down on my wrist. “Despite your blasted right hook, you’re still a brave girl.”

“No, not brave, just the only virgin on hand.” I pulled my arms in, seeing if I could wiggle free but it was no use. My Nephew, Lliel, wrestles bulls for a living, and Uncle Allen chops down trees. With my measly muscles, I wasn’t getting free. But, if I did get free, I was going to rip their family jewels off.

Nephew said nothing to me the entire way. Not that he spoke often, but one kind word might have been nice. We were family. Even a hey Neush, sorry about this would suffice. Hell, I’d welcome a diatribe. Instead, he tossed me against the stone slab so hard I slumped to the ground stunned.

“Lliel, don’t be coarse.” Uncle squeezed my nephew’s shoulder. “You don’t need to add to her pain.”

I gasped for air. Nothing came in or out my lungs despite my heaves.  I rolled to my side.

“How is sacrificing me benefiting the town?” My words strained through the few short puffs of breath. Everything was numb. I grabbed at the dirt like a handle that would anchor me.

“Lassie,” Uncle stepped forward and lifted me up. I threw dirt clods in his face.

“Ahhh!” Uncle kept a hold on my arm while he rubbed grit out of his eyes.

As I struggled in his grasp Lliel lunged for me.

I stepped back, and he tripped on my sneaker. His boot on my foot hurt, but when he fell, I heard a pop. Probably not bone, but it had to hurt like a mother. Deserving little cock.

“I’m the last unmarried woman in this backwards cheese-bum of a town.” I hit Uncle with my fist. I wasn’t a fighter. The black eye I gave Uncle was a lucky strike. Adrenaline can give you wonder woman powers, but only for a short while. After the mile long struggle my high was over. All I had left were weak muscles and a shaking body. Uncle took my blows as if I were a five year old.

A demon was slaying the town’s livestock. Feeding it a human would satisfy his blood lust. If the town folk didn’t provide a sacrifice, the demon would choose his own. Better for the town’s people to make the choice.

Uncle crushed me to his chest. A bear hug from this man was its own prison. “Neush, I didn’t make this decision.”

“But you’re still dragging me here.” I gasp for breath.

“The sacrifice must be human. If it eats all the livestock we’ll all starve. If it doesn’t get a human sacrifice, he’ll choose one all on his own. But this wouldn’t have been the choice I’d made.”

“Despite whatever honor you think it is for me to be eaten by a monster I don’t see anyone else volunteering for the job.”

“Each family is vying for themselves. No one wants to give up their wife, their husband, their children,” he paused and looked at Lliel. “Think of the babies not old enough to know the delights of what the world offers. You will save them.”

“But I’m eighteen! I’m an able-bodied woman. I can bear children. Why am I deemed best for slaughter?”

Uncle pushed me at arm’s length against the cold marble wall used as a sacrificial alter.

“You are the last unmarried girl here, it’s true. But there are other towns with other unmarried girls.” Uncle’s words hit me like a paddle to the head. He was telling me that while I was a rare commodity, being an unmarried woman, I wasn’t irreplaceable. Gee, now I feel so loved.
I tried to pull away. “So you’re just going to let me die here.”

Nephew grabbed my free wrist and locked a shackle around it. Seeing the irons were made for meatier victims, I pulled my fist back out and with a scoff, punched Lliel in the face. My nephew grunted but the blow didn’t so much as tweak his neck.

He tied a knot on my right wrist, double checking the rope’s strength. Then he wrapped the cord behind the upright stone altar and fastened my left, pulling taught until I was firmly outstretched.

Every knot held me fast and I mentally cursed all those cub scout meetings I had taken him to. Nephew had obviously absorbed knot-tying. He hadn’t tied my feet, but the stout rope was good for keeping me tied to a slab of cold granite for a few hours.

Lliel stared at me with those piercing blue eyes.

I stopped struggling, stood tall and proud as a lady should and kicked him right where it would hurt.

“Laddie, are you alright?” Uncle dropped down next to his brother’s son.

“Is he alright?” Spittle flew out with my words. “Tying me to this wall and leaving me to die is not alright.”

I kicked my legs out, trying to stomp him again. I wasn’t meat. I was worth fighting for. I was worth more than just the blood I could give a vengeful demon. Nobody deserved to be put out on a slab platter waiting to be devoured. Not even my ungrateful Nephew that I helped raise.
Uncle pulled Lliel from my flailing kicks and left without a backwards glance.

And so, there I was. Arms outstretched on an unyielding surface. I couldn’t even sit down. My wrists were tied around a boulder that served as a sacrifice altar for generations. The shackles above my head were rusted over and…oh, gross, was the stain old blood? The place was your typical, top of the hill so everyone could see you die, type of Mayan setup. Only this had scruffy trees and bushes surrounding my tombstone. I’d rather be in Mexico right now. At least it’d be warmer.

But, I hadn’t lost hope yet. I shimmied my arms back and forth so my bonds rubbed against the rough edges of the rock. If Mr. Demon took a while to get here, I might already be halfway to the next town. I’d never stop running if that’s what it took.

At first, my efforts were frantic. I sawed at the rope until my wrists felt raw and sweat stung my skin. My enthusiasm waned as my wrists turned into chum. I knew you could make fire from the friction of rope, and it felt like my skin would burst into flames.

I began to question what would happen if I did escape. The purpose of me being here was to save a town. Could I sacrifice myself for them? Would my death mean they lived? If I managed to get away, would the demon look for me? Would he turn to the villagers and eat one of them for having no sacrifice on the altar? Who would he eat? My mother? My sister?

No. I can’t think like that. I don’t care what kind of honor it is to be chosen. I have to get out of here.

The bushes rustled just beyond the clearing. My heart leapt, pounding in my throat. Oh Gods, he’s here!

But it wasn’t a demon. It was someone I knew well.

“Oh gods, Zhiek!” I was saved. My handsome savior had come to take me away. Zhiek, my adventurous childhood friend would get me the hell out of here. “Where have you been? The town’s gone crazy. When did you get back from hunting? We’ve had a demon attack.” I struggled with my bonds. “I’m the sacrifice. Can you believe they didn’t want to fight for me? They grabbed the first available single woman at the square and dragged me here.” I smiled at my own humor. I was pretty much the only single woman in town.

“What’s wrong?” I stopped flexing my arms to get a better look at him. Gods, I hoped he wasn’t just here to tell me goodbye.

He shuffled forward. Not the usual sure-footed acrobat I knew. A chill engulfed my spine one vertebrae at a time.

“Zhiek?” His momentum towards me seemed forced. A drunk could walk with more conviction. He was freaking me out. “Zhiek?”

“Neu-ush.” He pronounced the word as if he was practicing syllables he’d never heard before.

My friend stopped and pulled his head up, enough to get the brim of his hat out of his face. But it wasn’t my friend anymore. His eyes glowed in a swirl of colors. They were as beautiful as a rainbow. I’d be able to look at them for hours if I didn’t know that was the tell-tale sign of a demon. Tears welled in my eyes. The demon decimating our food source was my friend.

Zhiek stared. His eyes had no iris, but a myriad of emotion flitted over his face. My friend since I can remember stared at me confused, as if he didn’t know how he came to be there. Then his eyes widened, and he looked around. “Neush?”